When Jesus was born in Bethlehem of Judea, in the days of King Herod, behold, magi from the east arrived in Jerusalem, saying, “Where is the newborn king of the Jews? We saw his star at its rising and have come to do him homage.”

When King Herod heard this, he was greatly troubled, and all Jerusalem with him. Assembling all the chief priests and the scribes of the people, he inquired of them where the Messiah was to be born. They said to him, “In Bethlehem of Judea, for thus it has been written through the prophet:

‘And you, Bethlehem, land of Judah, are by no means least among the rulers of Judah; since from you shall come a ruler, who is to shepherd my people Israel.'”

Then Herod called the magi secretly and ascertained from them the time of the star’s appearance. He sent them to Bethlehem and said, “Go and search diligently for the child. When you have found him, bring me word, that I too may go and do him homage.”

After their audience with the king, they set out. And behold, the star that they had seen at its rising preceded them, until it came and stopped over the place where the child was.

They were overjoyed at seeing the star, and on entering the house they saw the child with Mary his mother. They prostrated themselves and did him homage. Then they opened their treasures and offered him gifts of gold, frankincense, and myrrh (Matthew 2:1-11).

When we think of “Christ the King,” a child wrapped in swaddling clothes and lying in a manger is probably not the first thing that comes to mind. So too with the people of Jesus’s time. They were awaiting a great Messiah: a warrior king, one who would save them from the oppression of the occupying Roman forces and restore Jerusalem to its previous greatness.

And yet their Savior and King came to them as a tiny babe. Born poor. Born without status. Born with a manger for a throne.

We would be mistaken to think that Jesus’s reign as King began only later in life, as he began his public ministry full of signs and wonders. Such thinking would imply a complete misunderstanding of the nature of his kingdom. Our Lord came to establish a kingdom “not of this world,” (John 18: 36) a kingdom founded on love and humility, a kingdom beautifully lived out in the silence and poverty of Bethlehem.

The infant King, our infant King, did not reign with orders and edicts. He possessed no strength and was in fact completely helpless in the arms of his mother and foster father. And yet in that tiny cave, the love of God reigned in the way only God can: in the silent, selfless love of an omnipotent God who became a tiny babe so as to give himself to each one of us. There, Our King and God bent down to dwell among mere creatures as one of the least of us.

Let us take a moment to contemplate our infant King, lying in the manger. Perhaps we might get up the courage to pick him up in our arms and allow his tiny fingers to wrap around our own. As we gaze upon his peaceful face, we might whisper softly to him, telling him that we are no longer afraid to allow him to be Our King.

What might this infant King wish to say to us from his manger throne? As we begin our journey toward the Church’s feast of Christ the King, perhaps he wishes to remind us that in order for him to reign more fully in our hearts, we must learn to embrace the path chosen by this tiny child King:

Christ, my Infant King, you became a child so that I might not be afraid to draw close to you. Break down my defenses with your defenselessness. I want to give you free reign in my heart. Teach me to become more childlike in my dealings with others and with you, so that you might truly become the King of my heart.

Jesus meek and humble of heart, make my heart more like yours.

Did you miss a day?  See all the day’s meditations below.

The Kingdom without End:
A Retreat Guide on Christ the King 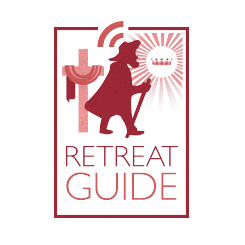